This page is simply intended as a quick reference to show what is on each locus. For more detailed information about the individual allele, see the pages in the "Main Stuff" section.

Remember, every dog has two alleles from each locus. They can have two of the same allele, in which case they're homozygous, or two different alleles, in which case they're heterozygous. In most cases, a heterozygous dog will express whichever of its alleles is the most dominant. Ocassionally incomplete dominance occurs (probably in the A locus tan markings and almost certainly in white markings), and this means that the dog expresses the most dominant gene but is also partly affected by the less dominant one. For example, a genotype of Ssp (one copy of the allele for no white spotting, one copy of the piebald allele) may result in a dog with some white markings, but less than a homozygous piebald (spsp).
Alleles are listed roughly in order of dominance. For some locii, this is completely guesswork, and may be incorrect.

Also, remember the two types of pigment - eumelanin (black, liver, blue, isabella), which affects the coat, nose and eyes, and phaeomelanin (red), which affects only the coat. I have specified below which type of pigment is affected by each locus.

A locus ("agouti series", affects distribution of both eumelanin and phaeomelanin)

- Ay: Sable (red with or without black tipping). Used to be labelled ay when dominant black was believed to be above it on the A locus, but now black has been given its own locus (K) and sable has been promoted to the most dominant on its locus (so has gained a capital letter!).
- aw: Agouti (banded hairs). Like sable above, but the hairs all over are banded with black. This is most likely the gene responsible for wolf grey.
- at: Tan points (black body with red on muzzle, chest, eyebrows, legs and vent). Only dominant over recessive black (below), so a dog needs to be homozygous for tan points in order to express them (or heterozygous for recessive black and tan points, but recessive black is very rare).
- a - Recessive black (solid black with no red in the coat at all).

- B: Normal pigment. A Bb or BB dog produces normal black eumelanin.
- b: Liver pigment. A bb dog produces liver eumelanin instead of black. There are three variants of b (bc, bd and bs), all of which are phenotypically the same.

- Em: Masked (black on the muzzle and the ears, and sometimes spreading to black tipping on the chest and/or back).
- Eg: Grizzle/Domino (eumelanin shading on the back, similar to shaded sable). Found only in certain sighthound breeds (Borzoi, Saluki, Afghan Hound). Requires tan points (atat) in order to be expressed.
- Eh: Cocker Spaniel sable (eumelanin shading on the back, as with domino). Found only in Cocker Spaniels. Requires tan points (atat) in order to be expressed, and possibly also dominant black (KK or Kk).
- E: Normal extension (no restriction of pigment). Usually written with a capital letter, but is in fact recessive to Em.
- e: Recessive red (solid red all over, except for white markings). An ee dog is unable to produce any eumelanin (black) in its coat. Any black present will be turned to red. The eyes and nose are, however, unaffected (a recessive red dog may still have a black nose).

- G: Progressive greying. A dog with one or two G genes will be born dark-coloured and its hair will lighten over time.
- g: Normal (no lightening of pigment).

- H: Harlequin. Areas between patches on a merle dog are turned to white, leaving solid pigmented patches on a white base. Only works with merle gene and does not affect non-merle dogs. Embryonic lethal gene when homozygous, all harlequins test as Hh.
- h: Non-harlequin (normal expression of merle).

I locus ("Intensity series", affects the richness of phaeomelanin)

- alleles not yet known

- K: Black (solid black all over). Overrides A (agouti) series. Any genes on the A locus will not be expressed.
- kbr: Brindle (black stripes on a red base). kbr is dominant over k, so a dog only needs one kbr in order to be brindle (but will be overriden by one K gene). Brindle dogs will express whichever genes are on their A locus, but the red parts of the coat (phaeomelanin) will be brindled (black parts will not be affected).
- k: Non-solid black. A kk dog will express whichever genes are on its A locus.

- M: Merle (black patches on a grey base). Dilutes random sections of the coat to a lighter colour, leaving patches of full pigment. Phaeomelanin is not affected - only areas of eumelanin can be merled.
- m: Non-merle (normal expression of eumelanin).

- S: No white (all of coat is pigmented - no white spotting).
- sp: Piebald (homozygous causes over 50% white, with large pigmented patches on a white base). Heterozygous piebalds may have varying amounts of white, from none at all to "pseudo-irish" (phenotypically the same pattern as irish spotting but not caused by the same allele)

- si: Irish spotting (white on muzzle, neck, chest, feet and tail tip). This type of white spotting may not actually be on the S locus but I have included it here for lack of anywhere else to put it! Homozygous sp causes irish markings and heterozygous may have any amount of white inbetween solid and irish.

- T: Ticking (white areas are ticked with small flecks or spots of colour). Ticking is whichever colour would have been on that area if the dog did not have white. Suspected to be another case of incomplete dominance - a TT dog has heavier ticking than a Tt dog.
- Tr: Roan (more dense than ticking)
- t: Clear white (no ticking on white areas).

A Summary of the Summary

Putting it All Together

Let's have a quick go at putting all this information together. Here's a genotype for a dog which we are going to decipher to work out what the dog would actually look like:

That looks daunting, so let's take each pair of genes individually, referring back to the summary of series above to see what each letter means:

So our dog will have sable (which can show through because there is no dominant black allele to stop them from being expressed), it'll be a dilute because it is dd, so it'll have blue eumelanin. It'll have the gene for harlequin but won't express it because it has no merle gene. Likewise, it'll have the gene for ticking but can't express that either because it has no white. It also has no no greying, no brindle, and no recessive red, but it does have a mask.

What we've ended up with is a blue sable ("fawn") with a mask: 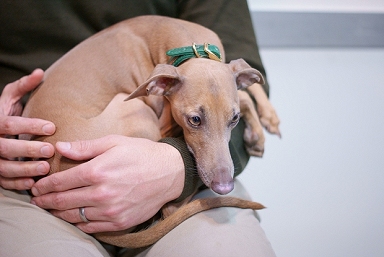